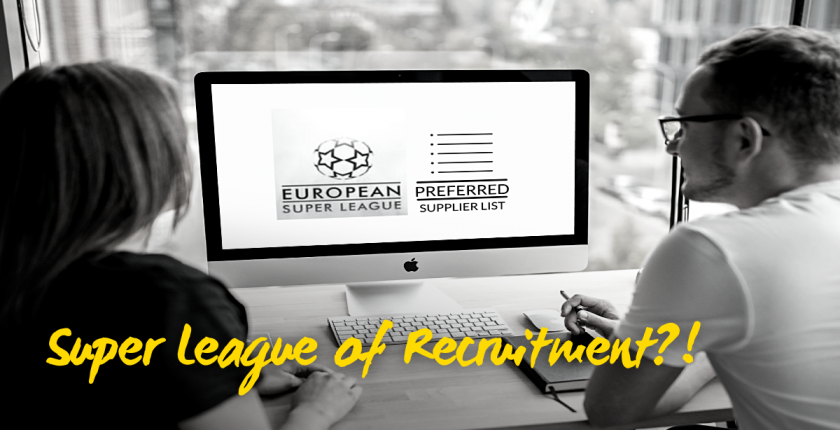 So there’s uproar about the traditional “top 6” football teams in the UK moving to a European ‘Super League’. A league based on past performances and size of club (some of the teams haven’t won the league in 10 Years, Tottenham haven’t ever won it!). A league where losers don’t get relegated and unless you’re bought out by a billionaire and have lots of money, you’re not allowed in. The uproar is about football being ruined by money and lack of competition. If it goes ahead there may never be a Leicester City style win again and it’ll ruin the aspirations of smaller clubs.

The European Super League is the equivalent of a recruitment PSL. Often a closed shop for big brand recruiters, the smaller companies who are more agile and deliver just as good if not better results, are overlooked. Often, Companies will choose a bigger corporate recruiter because “we cover every sector across the whole of the UK”… 2 months later have 100 unformatted CV’s, 30 hours of interview time and still have 5 open jobs.

The super league also lacks competition with no relegation, we hear the same about PSL’s, often we’ve had conversations with line managers who’re pulling their hair out because a big ‘one stop shop’ agency is on the PSL, aren’t genuine experts within their discipline and aren’t filling their roles. It’s the recruitment equivalent of staying in the top league regardless of performance or value added.

The managers of the club (employer hiring managers) are often in a lose-lose situation. They feel as though they can’t speak out as they are employed by higher powers, if they complain about the quality of the CV’s or the recruitment process it has they don’t get listened to or if they do speak up things don’t change. They can be in hot water so often keep their mouth closed. This is a continuous cycle which means they are never able to secure the best talent on the market, often overpaying in time and money to get people in place.

This isn’t a representation of the whole market, there are some excellent businesses who will have specialists or even regional specialists to cover really specific roles, regularly reviewing their recruitment suppliers as they do for every other aspect of the business to get the best people representing their brand.

Get in touch with us to discuss how we can offer a bespoke service, a more than competitive offering and an honest, transparent, proactive approach to Recruitment. We cover Engineers, Sales, Marketing and Commercial Staff. We may be able to but definitely won’t promise we can fill anything outside of this!